The world’s first Ultra Low Emission Zone (ULEZ) has come into force in central London, in the same area as the congestion charge, in a bid to clamp down on the city’s pollution crisis.

Operating 24 hours a day, every day of the year, drivers who don’t meet the ULEZ standards must pay a daily charge, on top of the congestion charge, to drive in this zone. The ULEZ charge will affect drivers of older, more polluting cars. It is estimated to affect about 40,000 vehicles every day. 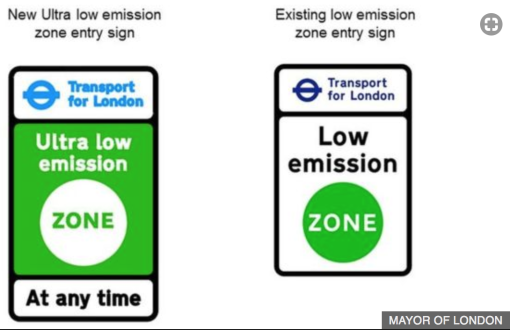 Transport for London’s (TfL) online vehicle checker can help you check if you’ll need to pay the new charge.

Vehicles that are non-compliant are generally:

The Federation of Small Businesses (FSB) said many small firms were “very worried about the future of their businesses” as a result of the additional costs.

TfL predicts the scheme will result in toxic emissions dropping by 45% in two years, and aim to expand the ULEZ to cover the entire area within the North and South Circular roads by 2021.

Jenny Bates, Friends of the Earth air pollution campaigner, said, “The ultra-low emissions zone has a crucial role to play in cleaning up the capital’s filthy air – but a strengthened scheme and additional measures are needed to protect the health of all Londoners” and is calling for cheaper and more extensive public transport, safer cycling routes, as well as a national scrappage scheme to help people switch their polluting vehicles for cleaner ones.

Residents within the congestion charge zone will be exempt from the ULEZ charge until October 2021 and will continue to pay heavily discounted rates of congestion and T charge, while everyone else affected will pay the ultra low emissions charge instead of the T charge.

Birmingham and Leeds are also planning to launch clean air zones in 2020, while Manchester is looking to introduce one further down the line.

This site uses Akismet to reduce spam. Learn how your comment data is processed.